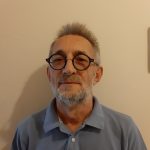 Konstantinos Goulianas serves as an Associate Professor in the Department of Informatics and Electronic Systems Engineering at the International Hellenic University in the field of “Programming of Scientific Applications and Numerical Analysis – Neural Networks”. He received his bachelor’s degree in mathematics from the Faculty of Mathematics of the University of Ioannina, Greece, in 1982, his master’s degree in Computer Science in 1987 from the Illinois Institute of Technology (IIT), USA and in 2000 his PhD in the area of Artificial Neural Networks (Applications to Numerical Analysis Problems) from the Department of Applied Informatics of the University of Macedonia.
From 1989 to 2005 he has been teaching as a Scientific-Laboratory Associate in the Department of Informatics of the Alexandrian Technological Educational Institute of Thessaloniki (ATEIT), courses such as Numerical Analysis and Scientific Applications, Neural Networks, Operating Systems (VAX-VMS, UNIX), FORTRAN I, FORTRAN II, PASCAL, Programming Techniques (Algorithmic).
In 2006 he was appointed Assistant Professor and in 2017 Associate Professor of the Department of Informatics and Electronic Systems Engineering teaching courses such as Numerical Analysis & Programming Science Applications, Machine Learning, Algorithms and Programming, Object Oriented Programming, Pattern Recognition – Neural Networks in the Undergraduate Department Program and participating in the teaching of the course Machine Learning at the Department Postgraduate Program Intelligent Internet Technologies.
He has been involved as a researcher in research programs for more than 20 years. He has published more than 10 scientific articles in international journals and conference proceedings and more than 20 citations from other researchers have been found in these publications. He has been a referee at international scientific journals and conferences and has contributed as a member of committees at international scientific conferences. His research interests focus on Neural Networks, Machine Learning, Numerical Analysis, Chaos, and Signal Processing.