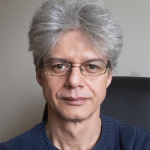 Athanasios Iossifides (Iosifidis) received his diploma in Electrical Engineering and his PhD from the Department of Electrical and Computer Engineering of Aristotle University of Thessaloniki. From 1999 to 2010 he was with COSMOTE SA, first as telecommunications engineer, then (2004) as leader of the Access and Transmission Network team while in 2008 he was appointed as the head of the Network Management Section of North Greece. He participated in 4 internal development projects on optimization of the transmission network and he was member of the vendor evaluation committee for 3G and 3.5G technologies. Additionally, he participated in several procedure optimization projects coordinating some of them. He co-organized with the HR and lectured 7 technical seminars on 3G and 3.5G technologies. From 2010 to 2019 he was with the Department of Electronics Engineering and since May 2019 he is with the Information and Electronic Engineering department teaching courses on Signal Processing, Wireless and Mobile Communications, and IoT. He was academic coordinator for the Erasmus+ programme of his department and member of the Erasmus Institutional Coordinating Committee from 2010 to 2018. Since October 2018 he is the Director of the Advanced Electronic Engineering Lab. He is a member of the Technical Chamber of Greece and IEEE since 1994. He has served as Editor for Wiley Transactions on Emerging Telecommunication Technologies (2013-2018) where, he received one of the Best Editors Award (2017), and IEEE Communications Letters (2015-2018). He has served as TPC co-chair in 4 international conferences and as a TPC member in numerous international conferences. He has participated in several national and international research projects on wireless communications and he coordinated a project on measurements conduction and evaluation of 2G and 3G networks of MTN Cyprus. His main research interests lie in the areas of wireless and mobile communications, IoT and STEM education. He has written with his colleagues over 40 scientific papers in international journals, conferences and books.