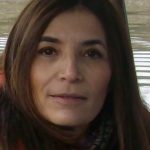 Melina P. Ioannidou was born in Thessaloniki, Greece. She is currently an Associate Professor on “Wireless Communications, Antennae and Communication Theory” in the Department of Information and Electronic Engineering, International Hellenic University.
She received the M.Sc. and Ph.D. degrees from the Department of Electrical and Computer Engineering, Faculty of Engineering, Aristotle University of Thessaloniki, Greece, in 1989 and 1997, respectively. Her Ph.D. thesis deals with the problem of scattering of electromagnetic waves by complex, dielectric, spherical structures, with applications to radar meteorology and detection of soot particles in the atmosphere.
From January 1990 to July 2003 she worked as researcher in the Department of Electrical and Computer Engineering, Aristotle University of Thessaloniki, Greece. She participated in several research projects, which dealt with mobile communications, design and construction of various RF components, biological effects of radiowaves, radar polarimetry and radar meteorology. From March 1998 to September 2004 she worked as instructor in the Department of Electronics, Alexander Technological Educational Institute of Thessaloniki (ATEITh), Greece. From October 2004 to December 2012 she served as Assistant Professor in the Department of Electronics, ATEITh, whereas since December 2012 she serves as Associate Professor in the same department. She has authored/coauthored more than 30 peer-reviewed journal and conference papers. There have been found more than 180 citations to her papers. She serves as reviewer to several scientific journals and conferences. She is a member of the Technical Chamber of Greece.

Any cookies that may not be particularly necessary for the website to function and is used specifically to collect user personal data via analytics, ads, other embedded contents are termed as non-necessary cookies. It is mandatory to procure user consent prior to running these cookies on your website.